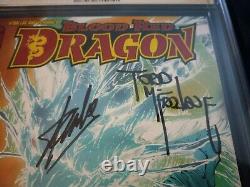 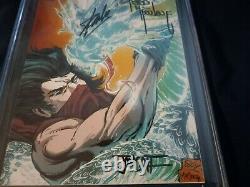 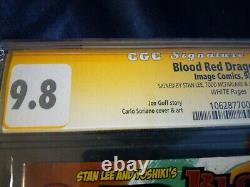 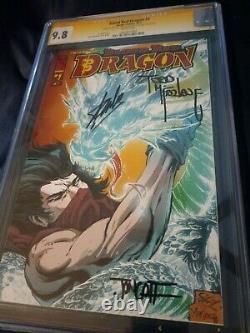 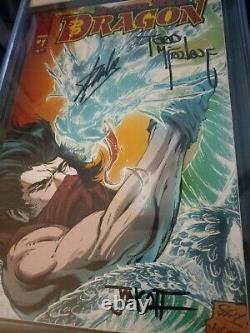 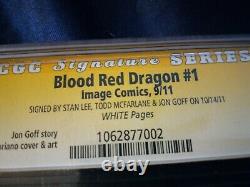 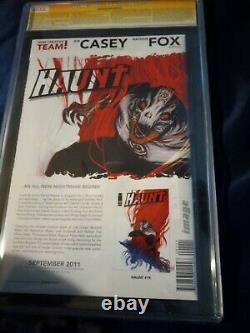 Blood Red Dragon is a 2011 Comic Book venture between Stan Lee, Yoshiki Hayashi, Jonathan Goff, and Todd McFarlane. It's either a promotional piece or vanity comic for Yoshiki Hayashi and X Japan, or, if you choose a more idealistic view, a Life Embellished Author Avatar comic that just happens to feature Yoshiki as the main character and was promised to feature others at some point but never did.

The series lasted for 3 issues. According to the press release, Blood Red Dragon focuses on the origin of an ancient and benevolent force, locked in an epic battle with the dark armies of Oblivion.

Creative expression and destiny collide, as once in a generation an individual is born with the potential to unlock the awesome might of the Blood Red Dragon, thus channeling a power beyond comprehension and assuming the mantle of Earth's protector. When agents of Oblivion discover that the key to accessing the Blood Red Dragon's energy lays in music-the melodic heart of the human spirit, they launch a series of violent attacks on musicians across the globe. As he performs in front of a large crowd during the opening show of a massive world tour, drummer and keyboardist Yoshiki comes face-to-face with his destiny, experiencing a transformation that will forever change his life-and possibly the fate of the world. When asked about the series Todd McFarlane said.

Being able to collaborate with creators on a global level is always a thrill. Working with two big names, like Yoshiki and Stan Lee, I hope I'm able to add a little bit of my touch to a book that my, Stan's, but most importantly Yoshiki's fans will enjoy. At the same time, I hope this book helps introduce Yoshiki to fans that don't know him on American shores.

As an overwhelming force of darkness prepares for an epic assault on reality, one man must call upon a power beyond his control to stand against the rising tide of Oblivion... Enter the BLOOD RED DRAGON. With his life suddenly thrown into chaos, Yoshiki must come to grips with the devastating powers at his command. But, with time running out, he must also discern friend from foe, as new players in the war with Oblivion make themselves known, and dark assassins continue their assault on the lyrical heart of humanity. THE END OF ALL THINGS BEGINS HERE!! On July 21, 2011 at San Diego Comic-Con International, McFarlane and Stan Lee debuted their new comic, Blood Red Dragon. The series is a collaboration with musician Yoshiki and stars a fictionalized version of him. This book was signed October 14, 2011 at a signing event at NEW YORK COMIC CON. This copy is signed and authenticated by and for CGC by Stan Lee, Todd McFarlane, and Jon Goff. A comic dual signed by Stan Lee and Todd McFarlane is incredibly valuable to collectors, and is highly sought-after. This is a CGC-graded piece of history, graded a 9.8 by CGC. Now waiting to be sent to you. Take a look at the pictures they are scans of the actual book you will receive. Feel free to ask questions. This item is in the category "Collectibles\Comic Books & Memorabilia\Comics\Comics & Graphic Novels".issues" and is located in this country: US. This item can be shipped to United States, Canada, United Kingdom, Denmark, Romania, Slovakia, Bulgaria, Czech Republic, Finland, Hungary, Latvia, Lithuania, Malta, Estonia, Australia, Greece, Portugal, Cyprus, Slovenia, Japan, China, Sweden, Korea, South, Indonesia, Taiwan, South Africa, Thailand, Belgium, France, Hong Kong, Ireland, Netherlands, Poland, Spain, Italy, Germany, Austria, Bahamas, Israel, Mexico, New Zealand, Singapore, Switzerland, Norway, Saudi Arabia, United Arab Emirates, Qatar, Kuwait, Bahrain, Croatia, Republic of, Malaysia, Brazil, Chile, Colombia, Costa Rica, Panama, Trinidad and Tobago, Guatemala, Honduras, Jamaica, Barbados, Bangladesh, Bermuda, Brunei Darussalam, Bolivia, Ecuador, Egypt, French Guiana, Guernsey, Gibraltar, Guadeloupe, Iceland, Jersey, Jordan, Cambodia, Cayman Islands, Liechtenstein, Sri Lanka, Luxembourg, Monaco, Macau, Martinique, Maldives, Nicaragua, Oman, Peru, Pakistan, Paraguay, Reunion, Vietnam, Uruguay.