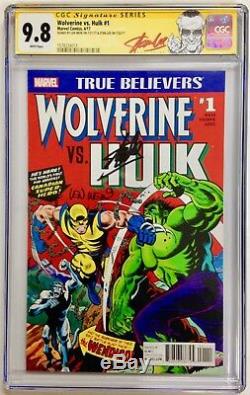 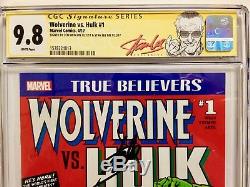 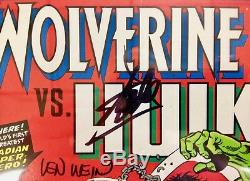 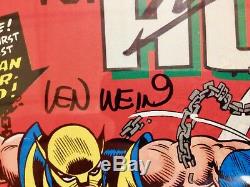 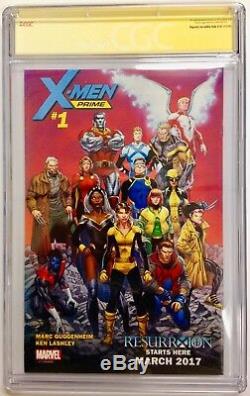 VERY FEW WERE SIGNED BY STAN LEE THIS MAY BE THE ONLY ONE SIGNED BY BOTH STAN LEE & LEN WEIN IN CGC 9.8 CONDITION LEN WEIN PASSED AWAY LESS THAN TWO MONTHS AFTER SIGNING STAN LEE EXCELSIOR LABEL! NO ONE WANTS TO GIVE THESE UP SO THIS MAY BE YOUR ONLY OPPORTUNITY TO OWN THIS HISTORIC ISSUE SIGNED BY THE LATE GREAT STAN LEE AND LEN WEIN! AUTHENTIC: This is an authentic original CGC signed by Stan Lee & Len Wein Wolverine vs. BIO: Stan Lee (born Stanley Martin Lieber December 28, 1922 November 12, 2018) was an American comic book writer, editor, and publisher who was active from the 1940s to the 2010s. He rose through the ranks of a family-run business to become Marvel Comics' primary creative leader for two decades, leading its expansion from a small division of a publishing house to a multimedia corporation that dominated the comics industry.

In collaboration with others at Marvelparticularly co-writer/artists Jack Kirby and Steve Ditkohe co-created numerous popular fictional characters, including superheroes Spider-Man, the X-Men, Iron Man, Thor, the Hulk, the Fantastic Four, Black Panther, Daredevil, Doctor Strange, Scarlet Witch and Ant-Man. In doing so, he pioneered a more naturalistic approach to writing superhero comics in the 1960s, and in the 1970s he challenged the restrictions of the Comics Code Authority, indirectly leading to changes in its policies. Lee was inducted into the comic book industry's Will Eisner Award Hall of Fame in 1994 and the Jack Kirby Hall of Fame in 1995. He received the NEA's National Medal of Arts in 2008. Leonard Norman Wein (June 12, 1948 September 10, 2017) was an American comic book writer and editor best known for co-creating DC Comics' Swamp Thing and Marvel Comics' Wolverine, and for helping revive the Marvel superhero team the X-Men (including the co-creation of Nightcrawler, Storm, and Colossus).

Additionally, he was the editor for writer Alan Moore and illustrator Dave Gibbons' influential DC miniseries Watchmen. Wein was inducted into the Will Eisner Comic Book Hall of Fame in 2008. THANKS FOR LOOKING COME BACK SOON MORE AWESOME TREASURES ARE ADDED WEEKLY!!

PACKING METHODS: All flat paper items are sent in poly sleeves with over sized backing boards. Fragile and larger items are bubble wrapped and sent in sturdy boxes with peanuts. We maintain high standards on every level. CONDITION: Grading conditions are subjective. Be your own judge when deciding the condition of items vintage or new.

We do have thousands of Positive Feedbacks and Return Customers. We try to provide clear information with known historical background on all our auctions. We sell VINTAGE AUTHENTIC ORIGINAL COLLECTIBLES that are intelligent investments and will continue to increase in value. Records LPs EPs 45s CDs DVDs.

The seller is "thejackpot" and is located in Los Angeles. This item can be shipped worldwide.